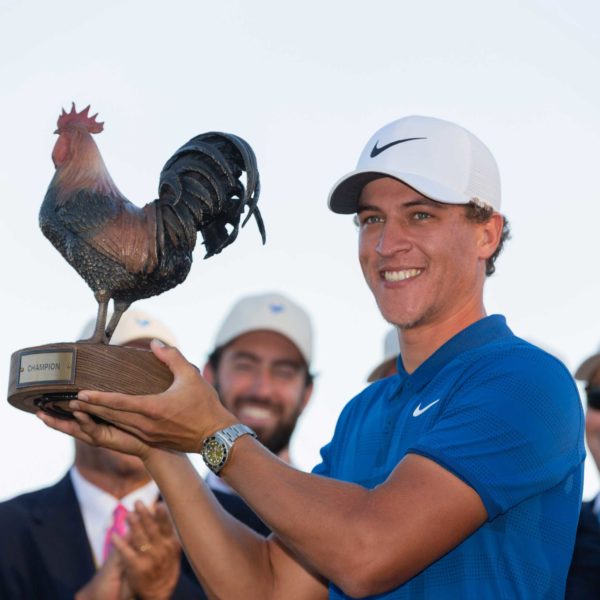 JACKSON, Miss. (October 28, 2018) — In his second start as a PGA TOUR member, rookie Cameron Champ lived up to his name, with at least a share of the lead the entire tournament. Champ, with his dominating long drives, played the front nine in 1 over to fall into a tie, yet came back at the end with five birdies on his last six holes to win the 2018 Sanderson Farms Championship.

The 23-year-old carried a four-stroke lead into Sunday’s final round, closing out with a 4-under 68 for a four-stroke victory, securing his win at 21-under 267. Champ, in his 9th career start on the PGA TOUR, earned his PGA TOUR card through the Web.com Tour, thanks in part to winning the 2018 Utah Championship. With today’s Sanderson Farms Championship win, he claims a $792,000 prize and 300 FedExCup points.

“First off, I’d like to thank my parents, my family, and close friends who have supported me all throughout the year,” said Champ. “I especially want to mention my Papa Champ back home. I wish he could be in Mississippi to celebrate this win with us, but I know he is at home watching. He is the man who made this happen for me.”

“Since this time last year, I graduated from college, went to Q school, then won the Web.com Tour in Utah,” Champ continued. “And now on my second start on the PGA TOUR, I have my first win.”

With a rainy then chilly start to the tournament, the weather improved each day, with picture perfect clear skies and temps in the low 80’s for Sunday’s finale.

“We have enjoyed a spectacular week of championship golf and, are very excited to have this fine young man represent our tournament as our champion,” said Joe F. Sanderson, Jr., Chief Executive Officer and Chairman of the Board of Sanderson Farms. “We are thrilled that we have another first time winner as our champion. Cameron put on a superb display of golf this week.”

The Sanderson Farms Championship is the fifth of 46 events in the 2018-19 PGA TOUR season. The main benefactor is Friends of Children’s Hospital and the young patients at Batson Children’s Hospital, part of Children’s of Mississippi. The tournament also donates a portion of the proceeds to 35+ additional charities arounds the state.

“This tournament was brought to you on behalf of the 275 members of Century Club Charities,” said Jeff Hubbard, Century Club Charities president. “The Championship could not run without a very special group of sponsors, and it starts with the absolute best sponsor anyone could ever have, Sanderson Farms led by Joe Sanderson and his amazing team, and of course the best Tournament Director on the PGA TOUR, Steve Jent, and his incredible staff.”

In addition to world-class golf, the tournament staff seamlessly executed a number of events throughout the week, including two Pro-Ams, a sold-out Women’s Day luncheon, clinics for youth and special needs, and a host of other activities for everyone.

“Interest in the Sanderson Farms Championship has increased every year, as evidenced by the increase in sales and spectator attendance,” said Executive Director Steve Jent. “New sponsors came on board, Pro-Ams were sold out early, and media participation has increased every year, translating into more contributions to charity.” The total amount raised by the tournament will be announced in early 2019.

About The Sanderson Farms Championship
The Sanderson Farms Championship is an annual stop on the PGA TOUR hosted by Century Club Charities, a non-profit, 501(c)(3) organization whose mission is to promote the game of golf for the benefit of charity. The tournament’s primary beneficiary is Friends of Children’s Hospital. The tournament has been part of the PGA TOUR schedule since 1968 and is now in its eighth year as a part of the FedExCup. Sanderson Farms (NASDAQ: SAFM), the nation’s third largest poultry producer based in Laurel, Miss., is the title sponsor.

About Sanderson Farms
Sanderson Farms, Inc., founded in 1947, is engaged in the production, processing, marketing and distribution of fresh and frozen chicken and other prepared food items. Employing more than 15,000 employees in operations spanning five states and 17 different cities, Sanderson Farms is the third largest poultry producer in the United States. As a company, Sanderson Farms is committed to adopting a fresh approach in everything they do, not only where products are concerned, but company-wide as well. Though the company has grown in size, it still adheres to the same hometown values of honesty, integrity, and innovation that was established when the Sanderson family founded the company.