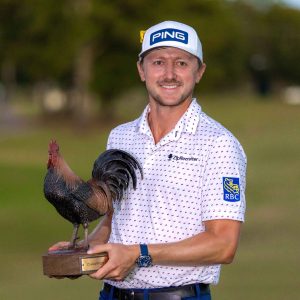 JACKSON, Miss. (October 2, 2022) – Mackenzie Hughes captured the Sanderson Farms Championship on Sunday, defeating Sepp Straka in a playoff at The Country Club of Jackson. Hughes birdied the second playoff hole to seal his second win on the PGA TOUR, his first six years ago at the 2016 RSM Classic, also in a playoff.

The Dundas, Ontario golfer Hughes and Straka closed out the week at 17-under par through 72 holes, with Hughes shooting a 3-under 69 in the final round. Hughes birdied the second playoff hole from just over eight feet for the win. With the victory, Hughes claimed a $1.422 million prize from a $7.9 million purse and 500 FedExCup points.

With the win, Hughes will be fully exempt on tour through 2025. He also gained a spot in the Sentry Tournament of Champions, the PGA Championship, and the Masters next season.

“I can’t stay enough about what a great job the Sanderson Farms Championship staff has done this week, the golf course is unbelievable, the hospitality is amazing, the volunteers are so friendly,” said Hughes. “Of all the tournaments I’ve played in, it’s just the best.”

“We are very excited to have Mackenzie as our 2022 Champion,” said executive director Steve Jent. “I have known him for several years. He is truly a class act and will be a great ambassador for the tournament. We couldn’t have asked for a better tournament experience this week to  begin our new era with the Wayne-Sanderson Farms organization. We have the best title sponsor on the PGA TOUR in Wayne-Sanderson Farms.”

“We are a newly formed company – literally as of two months ago –  and as a company we have a bright future ahead of us,” said J. Clinton (Clint) Rivers, President, Chief Executive Officer, and Chairman of the Board of Wayne-Sanderson Farms. “For many of us (at Wayne-Sanderson Farms) this is our first experience with this event, and I couldn’t think of a better experience. The children’s hospital is a great charity for us to be involved with, and we are proud to be associated with them.”

“I have been asked several times this week about the future of the championship, continued Rivers. “And I’ve only got one thing to say. See you next year!

“The main benefactor of the Sanderson Farms Championship is Children’s of Mississippi, the state’s only children’s hospital. The tournament also donates a portion of the proceeds to over 60 additional Mississippi charities.

The total amount raised by the 2022 tournament will be announced later this year. The 2023 Sanderson Farms Championship will be held October 2-8, 2023.