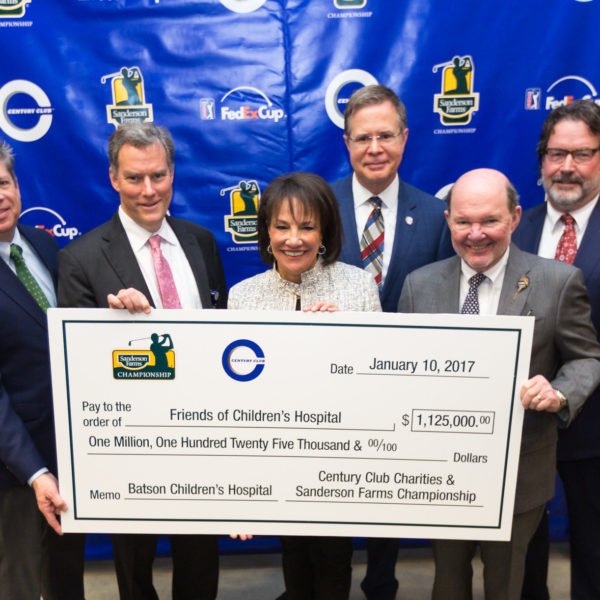 This year’s donation will be designated to the $100 million Children’s of Mississippi “Growing Campaign.” The funds raised in this capital campaign will help UMMC expand and update space dedicated to pediatric care, including an expanded and renovated neonatal intensive care unit (NICU); additional rooms for the pediatric intensive care unit, more operating rooms, and the creation of an imaging clinic for pediatric patients.

Peter Marks, Century Club Charities president, said, “The mission of Century Club Charities is to promote the game of golf to benefit Mississippi charities. Having Sanderson Farms as our title sponsor enables us to give a nice donation to Friends of Children’s Hospital in support of Children’s of Mississippi’s “Growing Campaign,” which fulfills our mission of benefiting the children of Mississippi.”

“Sanderson Farms became a title sponsor of the tournament because of its philanthropy,” said Joe Sanderson, CEO and Chairman of the Board of Sanderson Farms. “As a good corporate citizen, Sanderson Farms gives back to others in the communities where we live. Making a contribution of this magnitude to Children’s of Mississippi at a time when expansion and updates of pediatric care at Batson Children’s Hospital and UMMC are being planned is heart-warming to all of us at Sanderson Farms.”

“This year was perfect all around, from the weather and golf course, to the volunteer, sponsor, and spectator support. All of this combined has translated into a record contribution to Friends of Children’s Hospital,” said Executive Director Steve Jent.

About The Sanderson Farms Championship
The Sanderson Farms Championship is an annual stop on the PGA TOUR hosted by Century Club Charities, a non-profit, 501(c)(3) organization whose mission is to promote the game of golf for the benefit of charity. The tournament’s primary beneficiary is Friends of Children’s Hospital. The tournament has been part of the PGA TOUR schedule since 1968 and is now in its seventh year as a part of the FedExCup. Sanderson Farms (NASDAQ:SAFM), the nation’s third largest poultry producer based in Laurel, Miss., is the title sponsor.

About Sanderson Farms
Sanderson Farms, Inc., founded in 1947, is engaged in the production, processing, marketing and distribution of fresh and frozen chicken and other prepared food items. Employing more than 13,000 employees in operations spanning five states and 13 different cities, Sanderson Farms is the third largest poultry producer in the United States. As a company, Sanderson Farms is committed to adopting a fresh approach in everything they do, not only where products are concerned, but company-wide as well. Though the company has grown in size, it still adheres to the same hometown values of honesty, integrity, and innovation that was established when the Sanderson family founded the company in 1947.

About The University of Mississippi Medical Center
A campus of the University of Mississippi, UMMC is the state’s only academic medical center. Located in Jackson, it encompasses six health science schools, including medicine, nursing, health related professions, dentistry, pharmacy and graduate studies. The Medical Center’s health-care enterprise includes the state’s only level one trauma center and its only children’s hospital.  UMMC’s education, research and health-care missions share the objectives of improving the health of the state’s population and eliminating health disparities. For more information, visit http://www.umc.edu and umc.edu/news_and_publications.