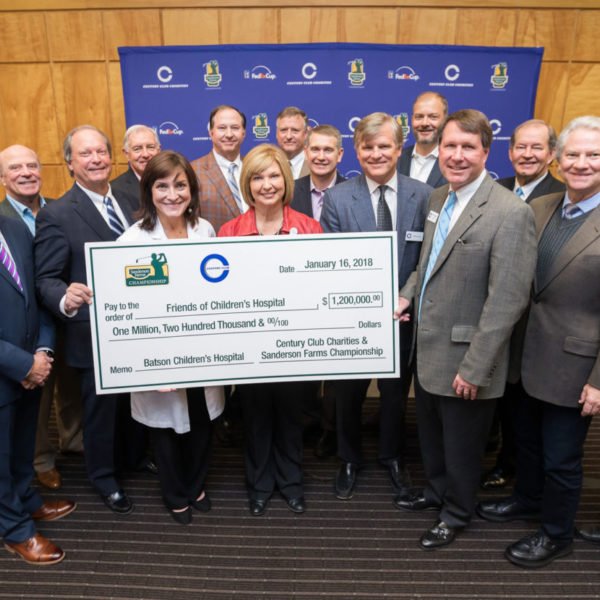 Jeff Hubbard, Century Club Charities president, said, “The mission of Century Club Charities is to promote the game of golf to benefit Mississippi charities. Having Sanderson Farms as our title sponsor enables us to proudly give our primary donation to Friends of Children’s Hospital, as well as a number of other donations to worthy Mississippi charities.”

This year’s gift is earmarked for the nonprofit’s $20 million pledge to the Campaign for Children’s of Mississippi, a philanthropic effort of the University of Mississippi Medical Center that is helping fund construction of a seven-story, 340,000-square-foot pediatric tower adjacent to Batson Children’s Hospital.

Ground was broken on the project December 1, and construction is beginning this month. The tower is set to open August 2020.

Dr. LouAnn Woodward, UMMC vice chancellor for health affairs and dean of the School of Medicine, said, “The growth of Children’s of Mississippi will be transformational. Our new children’s tower will match the incredible skills of our physicians and staff with the surroundings and technology needed to offer our children the best care close to home. UMMC’s missions of educating the next generation of physicians and innovation through research will be strengthened by this project, which will also attract more pediatric specialists to the state.”

Children’s of Mississippi leaders anticipate recruiting 30-40 new physicians in the next five years as the new pediatric tower is built and after it is opened, since it will provide additional capacity. At a minimum, about 50-75 staff positions, not including physicians, would be added after construction.

Guy Giesecke, CEO of Children’s of Mississippi, said the partnership between Century Club Charities and Friends of Children’s Hospital is resulting in vast improvements in pediatrics at UMMC. “We are so grateful for this relationship and for the tremendous contributions that have come as a result of the success of the Sanderson Farms Championship.”

“Every year that Sanderson Farms is a part of this event, we grow more proud of all that it accomplishes and what that means to the state of Mississippi and the families and children who benefit from it,” said Joe Sanderson, CEO and Chairman of the Board of Sanderson Farms. “This year is no different. It is because of the sponsors, volunteers, and overall community support that an event of this magnitude has become such a success. We are proud of the money we have raised and the lives that will be changed for the better as a result of this good fortune.”

“I can’t think of a better ending to what was an amazing 50th anniversary tournament,” added SFC Executive Director Steve Jent. “Our record donation is the result of the hard work and support from all of our sponsors, volunteers, and fans. It’s exciting to see the impact we are making in our community!”

Sanderson Farms, Inc., founded in 1947, is engaged in the production, processing, marketing and distribution of fresh and frozen chicken and other prepared food items. Employing more than 14,000 employees in operations spanning five states and 14 different cities, Sanderson Farms is the third largest poultry producer in the United States. As a company, Sanderson Farms is committed to adopting a fresh approach in everything they do, not only where products are concerned, but company-wide as well. Though the company has grown in size, it still adheres to the same hometown values of honesty, integrity, and innovation that was established when the Sanderson family founded the company in 1947.

About Friends of Children’s Hospital

Supporting Mississippi’s only Children’s Hospital, Friends of Children’s Hospital is a nonprofit organization benefiting Batson Children’s Hospital, part of Children’s of Mississippi. Founded in 1989, Friends works to support and promote Mississippi’s only hospital designed and equipped specifically for the care and treatment of sick or injured children. Their goal is to raise money for state-of-the-art equipment, facilities and services for all pediatric patients by building a statewide base of community support. Voluntarism, fundraising events and awareness efforts make it possible for Friends to help Batson Children’s Hospital meet the EXTRAordinary needs of caring for its patients.  Want to become a member of Friends? Interested in volunteering or donating to help the kids? Find out how by visiting FOCH.org for more information.

About Children’s of Mississippi

About The University of Mississippi Medical Center

A campus of the University of Mississippi, UMMC is the state’s only academic medical center. Located in Jackson, it encompasses six health science schools, including medicine, nursing, health related professions, dentistry, pharmacy and graduate studies. The Medical Center’s health-care enterprise includes the state’s only level one trauma center and its only children’s hospital.  UMMC’s education, research and health-care missions share the objectives of improving the health of the state’s population and eliminating health disparities. For more information, visit http://www.umc.edu and umc.edu/news_and_publications.