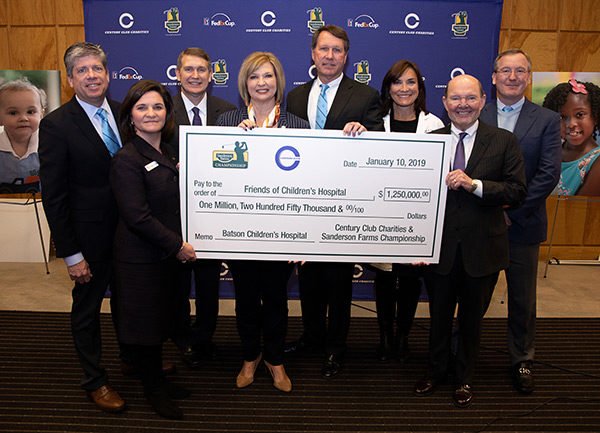 Century Club Charities, host organization for the Sanderson Farms Championship, presented a $1.25 million gift to Friends of Children’s Hospital this morning. Also during the event, Century Club Charities presented a second gift to FOCH for $125,000, with $100,000 through Mac Elliott in memory of Sidney Allen, Sr., former Board Chairman of Friends of Children’s Hospital, and $25,000 in other designated donations.

“Century Club Charities, in 2018, presented a $100,000 check to Friends of Children’s Hospital from the North Mississippi Classic; and for the second year in a row Carl and Gigi Allen with Allen Exploration, donated a second gift of $500,000 to the hospital, and finally a number of smaller gifts totaling $260,000 were given to 40 additional Mississippi charities,” shared Jeff Hubbard, Century Club Charities president. “These gifts, combined with the two checks today, make Century Club’s total charitable impact a grand total of $2,235,000 in 2018 alone.”

This year’s gift is earmarked for Friends’ contribution to the Campaign for Children’s of Mississippi, a philanthropic effort that is helping fund construction of a seven-story, 355,303-square-foot pediatric tower adjacent to Batson Children’s Hospital.

Ground was broken on the project December 1, 2017, and the tower, in its structural phase, is now more than 25 percent complete. Patients are expected to be receiving expert care in the expansion by fall 2020.

Friends of Children’s Hospital Chairman of the Board, Melanie Morgan, thanked Century Club Charities for their continued support through the tournament.

“This incredibly generous contribution will be directed toward Friends of Children’s Hospital’s $20 million pledge to fund this pediatric expansion,” Morgan said. “Friends helped fund the construction of Batson Children’s Hospital, and we are excited to build upon that legacy with this gift.”

Dr. LouAnn Woodward, vice chancellor for health affairs and dean of the School of Medicine at UMMC, said, “Our new children’s tower will match the incredible skills of our physicians and staff with the surroundings and technology needed to offer our children the best care close to home. UMMC’s missions of educating the next generation of health science professionals and innovation through research will be strengthened by this project, which will also attract more pediatric specialists to the state. This expansion will be truly transformational.”

Children’s of Mississippi leaders anticipate recruiting 30-40 new physicians in the next five years as the new pediatric tower is built and after it is opened, since it will provide additional capacity. At a minimum, about 50-75 staff positions, not including physicians, would be added after construction.

Guy Giesecke, CEO of Children’s of Mississippi, said the partnership between Century Club Charities and Friends of Children’s Hospital is resulting in improvements in pediatrics at UMMC. “We are so grateful for the tremendous contributions which have come as a result of the success of the Sanderson Farms Championship. This relationship is resulting in better pediatric care that’s close to home for the families of this state.”

Today’s announcement, made to a standing-room-only audience at the Norman C. Nelson Student Union at UMMC, was the culmination of a year of hard work, said Joe F. Sanderson Jr., CEO and Chairman of the Board of Sanderson Farms. “We work 12 months to get to that eight days of the Sanderson Farms Championship,” he said, “and all of that is about today and for the next 40 years. It’s about this new pediatric expansion and the physicians, nurses, families and children who will be cared for there.”

“There are so many people that make a day like today happen. Golf is an individual sport, one guy wins, but he has a huge team behind him just as we have a huge team who puts this tournament together,” added Sanderson Farms Championship Executive Director Steve Jent. “It is because of our team – the people, volunteers, and community support that an event of this magnitude has become such a success. It’s exciting to see the impact we are making in our community.”

About The University of Mississippi Medical Center
A campus of the University of Mississippi, UMMC is the state’s only academic medical center. Located in Jackson, it encompasses six health science schools, including medicine, nursing, health related professions, dentistry, pharmacy and graduate studies. The Medical Center’s health-care enterprise includes the state’s only level one trauma center and its only children’s hospital.  UMMC’s education, research and health-care missions share the objectives of improving the health of the state’s population and eliminating health disparities. For more information, Visit Our Website and Our Latest News.