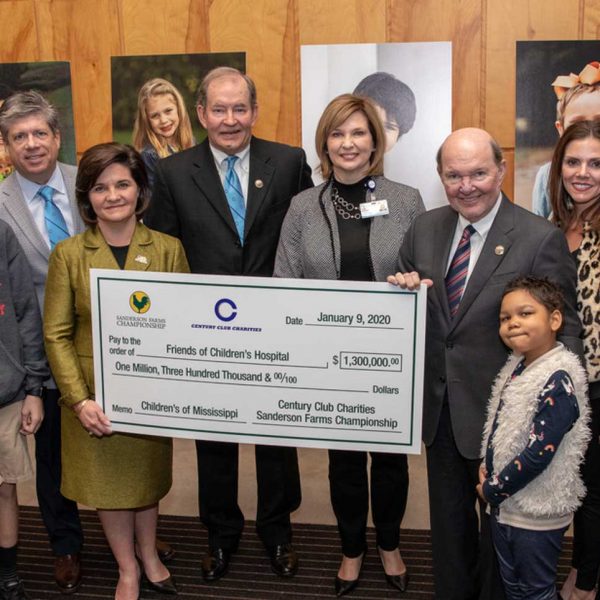 JACKSON, Miss. (January 9, 2020) – For the sixth year in a row, Century Club Charities has set a record in philanthropy, announcing a $1.3 million donation to Friends of Children’s Hospital from the 2019 Sanderson Farms Championship.

At a news conference Thursday, the tournament host presented a check to Friends, the fundraising organization dedicated to supporting the University of Mississippi Medical Center’s pediatric health care mission, including the state’s only children’s hospital.

“Children’s of Mississippi treats 150 to 175 thousand children per year from every city and county in the state of Mississippi. Today’s $1.3 million contribution is a Mississippi statewide event,” stated Pat Busby, President of Century Club Charities, Inc. “The real winner is not the Sanderson Farms Championship winner, but the patients, their families, and the dedicated doctors, nurses and staff at Children’s of Mississippi who provide miraculous care to the children of Mississippi, 24 hours a day, 365 days a year. As Sanderson Farms has done so extremely well, we encourage all Mississippi businesses to recognize the statewide effect and get involved to support the mission of Century Club Charities.”

This dedication was honored for a second consecutive year by the PGA TOUR with its “Best Charity Integration” award, which recognizes the tournament that best incorporates its charity and theme into all facets of the event.

“It’s really rewarding for the tournament to set another record for our annual donation to Friends and Children’s of Mississippi,” said Sanderson Farms Championship Executive Director Steve Jent.  “I’m really excited for our staff, volunteers, sponsors and, more importantly, the patients at Children’s that our first year as a stand-alone event was so successful.”

The donation to Friends of Children’s Hospital will go toward bringing a seven-story children’s hospital expansion to completion. In 2016, Friends made a $20 million pledge to the Campaign for Children’s of Mississippi, the philanthropic effort to raise $100 million to fund the project, which will more than double the square footage devoted to pediatrics at UMMC. 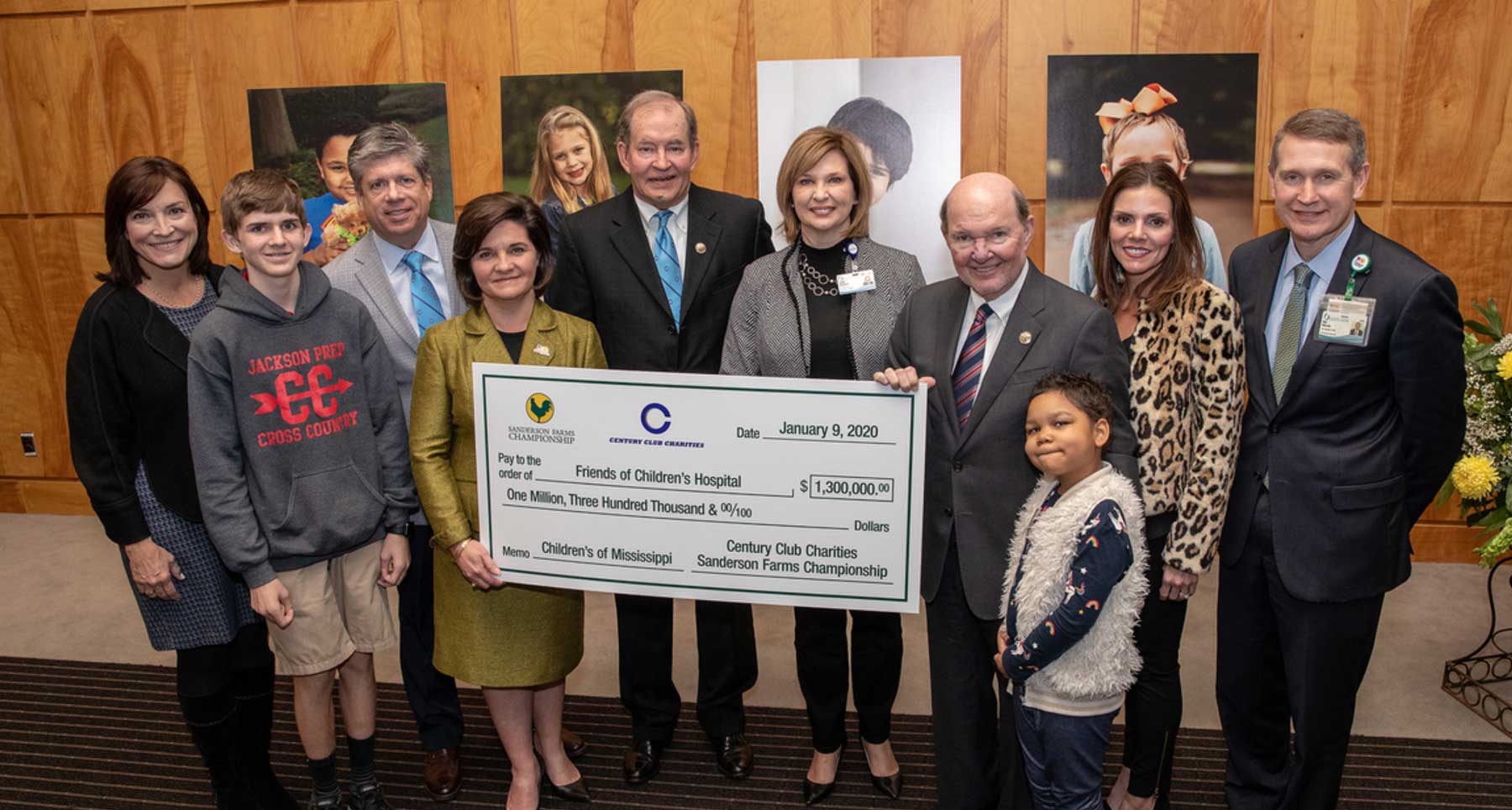 Sanderson Farms CEO and board chairman Joe Sanderson Jr., who chairs the Campaign for Children’s of Mississippi with his wife, Kathy, said the tournament will have a stand-alone date on the PGA TOUR schedule again this year, attracting a stronger field of competitors.

“The 2020 Sanderson Farms Championship will be bigger, better, and hopefully cooler,” he said. The tournament will be held at The Country Club of Jackson Sept. 28-Oct. 4.

While the Sandersons enjoy tournament week, the day when Century Club Charities presents its donation to Friends is their favorite. “It’s almost like Christmas,” he said. “It’s when we give back to the children and families, and the doctors, nurses, and staff of the children’s hospital.”

The Sandersons launched the Campaign for Children’s of Mississippi in 2016 with a $10 million personal donation.

“The work of so many to help children get a healthy start in life through Children’s of Mississippi is humbling,” said Dr. LouAnn Woodward, vice chancellor for health affairs and dean of the School of Medicine.

“We are so thankful for our partners and their generosity,” Woodward said. “Their dedication to pediatric health will benefit children now and into the future. We are honored and grateful to have, as supporters, people who have such a heart for children and families.”

Under construction since early 2018, the Children’s of Mississippi expansion will open in fall 2020.

To join in the Campaign for Children’s of Mississippi, visit growchildrens.org.

“There are so many people that make a day like today happen. Golf is an individual sport, one guy wins, but he has a huge team behind him just as we have a huge team who puts this tournament together,” added Jent. “It is because of our team – the people, volunteers, and community support that an event of this magnitude has become such a success. It’s exciting to see the impact we are making in our community.”

The Sanderson Farms Championship is an annual stop on the PGA TOUR hosted by Century Club Charities, a non-profit, 501(c)(3) organization whose mission is to promote the game of golf for the benefit of charity. The tournament’s primary beneficiary is Friends of Children’s Hospital. The tournament has been part of the PGA TOUR schedule since 1968 and is now in its tenth year as a part of the FedExCup. Sanderson Farms (NASDAQ:SAFM), the nation’s third largest poultry producer based in Laurel, Miss., is the title sponsor.

Sanderson Farms, Inc., founded in 1947, is engaged in the production, processing, marketing and distribution of fresh and frozen chicken and other prepared food items. Employing more than 17,000 employees in operations spanning five states and 17 different cities, Sanderson Farms is the third largest poultry producer in the United States. As a company, Sanderson Farms is committed to adopting a fresh approach in everything they do, not only where products are concerned, but company-wide as well. Though the company has grown in size, it still adheres to the same hometown values of honesty, integrity, and innovation that was established when the Sanderson family founded the company in 1947.

About Friends of Children’s Hospital

About Children’s of Mississippi

About the University of Mississippi Medical Center

UMMC is the state’s only academic medical center. Its education, research and health care missions share the objectives of improving the health of the state’s population and eliminating health disparities. Located in Jackson, UMMC encompasses seven health science schools, including medicine, nursing, health related professions, dentistry, pharmacy, graduate studies and population health. The Medical Center’s health care enterprise includes the state’s only Level I trauma center, only children’s hospital, and only organ and bone marrow transplant program. The Medical Center also is home to a Telehealth Center of Excellence, one of two in the nation.