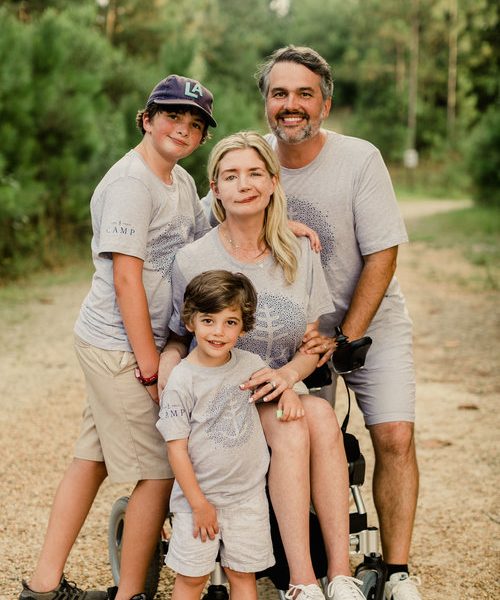 Tournament officials at the Sanderson Farms Championship announced the 2020 Women’s Day will be a day of encouragement and hope with keynote speakers Katherine and Jay Wolf. The Wolfs will share their inspirational story of Katherine’s survival and recovery from a catastrophic brainstem stroke shortly after the birth of their first son, as well as their universal insights on resilience and overcoming.

The Women’s Day luncheon, now in its seventh year, will be held at The Country Club of Jackson on Tuesday, September 29. International Paper returns as presenting sponsor for the popular event.

“We want to thank International Paper for once again serving as the luncheon’s presenting sponsor,” said Steve Jent, the tournament’s executive director. “Their ongoing support has allowed us to continue to raise the bar on what I believe is the best Women’s Day event on the PGA TOUR.”

Katherine and Jay Wolf are communicators and advocates. After moving to Los Angeles in their early 20s to pursue promising careers in law and entertainment, their life together seemed idyllic. Their son, James, was born in 2007, and six months later Katherine’s life nearly ended with a catastrophic stroke. Their tragedy resulted in Katherine spending 40 days on life support and two years in full-time brain recovery. The result was a severely disabled body including the removal of 60 percent of her cerebellum. Katherine’s survival and recovery have been nothing short of miraculous, and their story of her recovery continues to this day, including the birth of their miracle baby, John, in 2015.

“Perhaps now, more than ever, we feel our story and the hard-won lessons we’ve learned about thriving within limitations are needed in the world,” said Katherine Wolf. “In this time of uncertainty and fear, we are humbled to share this transformational message of healing and hope.”

Katherine and Jay have shared their journey of steadfast hope through their two books, Hope Heals: A True Story of Overwhelming Loss and an Overcoming Love (2016) and Suffer Strong (February 2020), and at speaking events both live and online before millions. Together, they founded Hope Heals camp, a community for families with disabilities like them. Katherine, Jay and their two sons live in the Atlanta area. To learn more, visit hopeheals.com or @hopeheals.

Through their ministry, Katherine and Jay aspire to encourage people everywhere who are suffering broken bodies, broken brains, and broken hearts, seeking to bridge the gap between those disabled, both externally and internally, with hope of healing for the overwhelming pains we all carry inside.

For more information regarding table purchases, please call the Championship office at 601. 898.4653 or email Erin Kiker at erin@sandersonfarmschampionship.com.

International Paper (NYSE: IP) is a leading global producer of renewable fiber-based packaging, pulp and paper products with manufacturing operations in North America, Latin America, Europe, North Africa, India and Russia. We create corrugated packaging products that protect and promote goods, and enable world-wide commerce; pulp for diapers, tissue and other personal hygiene products that promote health and wellness; and papers that facilitate education and communication. We are headquartered in Memphis, Tenn., employ more than 50,000 people worldwide and serve more than 25,000 customers in 150 countries. Net sales for 2018 were $22 billion. For more information about International Paper, our products and global citizenship efforts, please visit internationalpaper.com.

About the Sanderson Farms Championship

The Sanderson Farms Championship is an annual stop on the PGA TOUR hosted by Century Club Charities, a non-profit, 501(c)(3) organization whose mission is to promote the game of golf for the benefit of charity. The tournament’s primary beneficiary is Friends of Children’s Hospital. The tournament has been part of the PGA TOUR schedule since 1968 and is now in its 10th year as a part of the FedExCup. Sanderson Farms (NASDAQ:SAFM), the nation’s third largest poultry producer based in Laurel, Miss., is the title sponsor.

Sanderson Farms, Inc., founded in 1947, is engaged in the production, processing, marketing and distribution of fresh and frozen chicken and other prepared food items. Employing more than 17,000 employees in operations spanning five states and 17 different cities, Sanderson Farms is the third largest poultry producer in the United States. As a company, Sanderson Farms is committed to adopting a fresh approach in everything they do, not only where products are concerned, but companywide as well. Though the company has grown in size, it still adheres to the same hometown values of honesty, integrity, and innovation that was established when the Sanderson family founded the company in 1947.